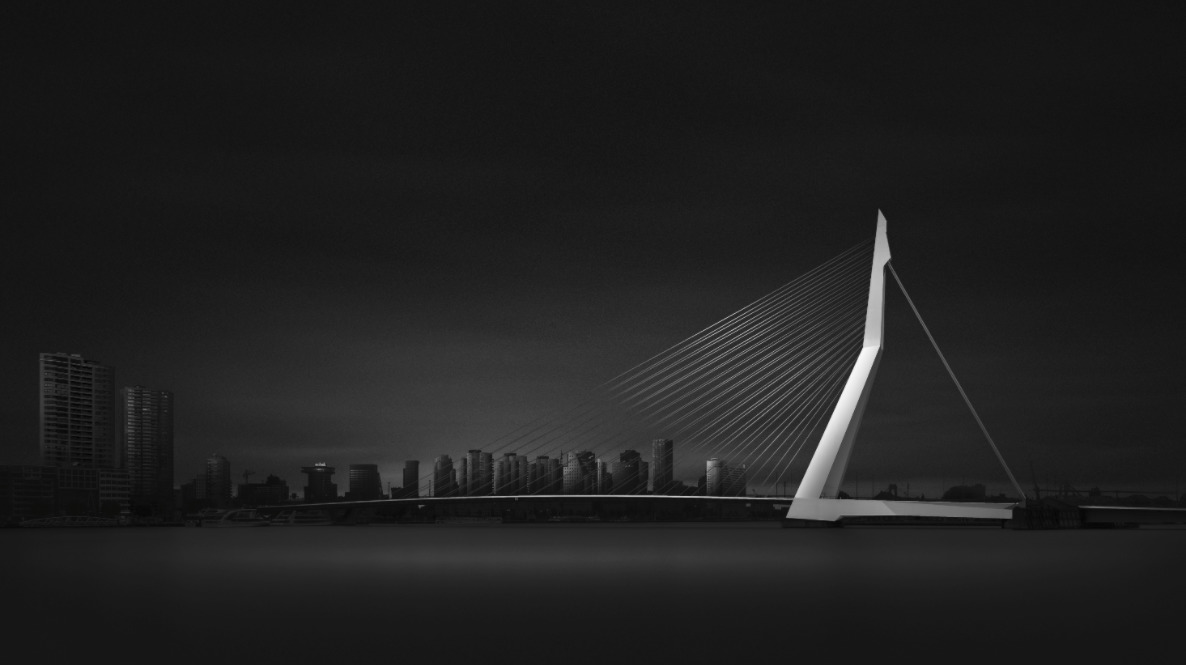 Erasmus Bridge over the River Maas in Rotterdam is gracefully silhouetted against the Dutch city’s skyline in Oscar Lopez’s elegant black-and-white photography. The bridge appears as a refined asymmetrical drawing reduced to its pure geometry – a slanted capital L with diagonal lines fanning outwards, its traffic lanes, cycle tracks, tram rails and footpaths completely obliterated. While not a work of advertising, the image is Lopez’s tribute to the bridge.

Called Erasmusburg in Dutch, the bridge was designed by the architecture firm UNStudio and completed in 1996. Lopez became interested in it after seeing a picture by the Dutch photographer Joel Tjintjelaar. “His image is so inspiring that I wanted to make my own version of it,” Lopez says. “I was amazed by the bridge’s beauty and how it decorates this part of the city. To me, it resembles the feet of a ballerina pointing to the sky.”

Lopez’s opportunity to photograph Erasmus Bridge presented itself in the summer of 2018. At the end of a family holiday returning from France to his home in Germany, he made a stopover in Rotterdam. “I went out very early on an overcast day and took the shot at around 6am; it’s of about five minutes of exposure,” he says. Post-production, Lopez enhanced the shot’s visual impact.

Asked how he choose his vantage point, Lopez replies: “I went around the area virtually on Google Earth – it’s amazing with how much precision you can simulate the shot to plan exactly where to put the tripod.”

Born in Mexico in 1977, Lopez moved to Germany to study engineering and works in Hamburg in the aeronautical industry. His obsession for order, lines and structure drew him to architecture and landscape photography. Among other subjects, he has captured the Frank Gehry-designed Fondation Louis Vuitton in Paris and the Chapelle Notre-Dame du Haut in Ronchamp designed by Le Corbusier.

The image of Erasmus Bridge belongs to Lopez’s ongoing ‘Waterfront Cityscape’ series, which includes photographs of London and Hamburg. “Every time I have the opportunity to travel to a city by a river or the sea, I try to photograph the important buildings at the waterfront,” Lopez explains. “Water in the foreground serves to isolate the building and present it majestically.” Other destinations that he would like to add to the series are Berlin, Amsterdam, Copenhagen, Lisbon, Chicago and New York.