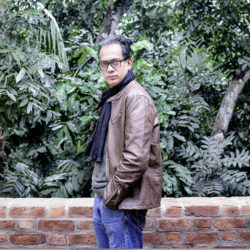 Mohammad Rakibul Hasan’s series, ‘The Last Savings’, focuses on the desperate situation of Dhaka slum dwellers struggling to afford food during the Covid-19 pandemic with aesthetic inventiveness and poignancy.

Hasan conceptualized a diptych approach that consisted of photographing the face-masked dwellers along with the meagre amount of food that they have left to eat against a black backdrop.

The Bangladeshi photographer documented 16 families in Dhaka’s Korail slum where an estimated 100,000 people live in small shacks with corrugated tin roofs in order to create a “visual survey” about their plight.

“I brought my portable studio setting to document them standing alone against a black backdrop as I had an intention to make a diptych of each family/person with their last remaining storage of food,” Hasan, 43, says.

Hasan photographed the slum dwellers – either women on their own, or with one or two children, or their husband – and then photographed their neatly arranged modest amount of food separately. Post-production, he merged each set of images into a seamless diptych.

His goal was to “document and warn the world” that there might be an imminent famine in Bangladesh due to the Covid-19 health and economic crisis. “Most of the slum dwellers in Dhaka lost their jobs and had to spend their savings [to buy food],” he laments about the widespread hunger. “Those who are living under the marginal [thresholds] across the globe are continuously facing adverse conditions, especially the scarcity of food.”

The arresting images have been published in the French daily newspaper Le Monde as well as other publications. The politically engaged project is represented by Clair by Kahn gallery in Erlenbach, Switzerland, with 50 percent of proceeds from the sales of the photographs going to the neediest families in the Korail slum.

Based in Dhaka, Hasan works as a photojournalist and for international NGOs. He is studying online for an MA in Photography at Falmouth University in Britain and for a Certificate in Creative Practices at the International Center of Photography in New York. His current projects include documenting the Rohingya refugee crisis, which he began in 2017 when the Rohingyas fled genocide in Myanmar. Looking ahead, Hasan is planning to embark on another project about the impact of the climate crisis.

“During this Covid-19 pandemic, I’ve been working extensively for a great number of international NGOs and news agencies as I’ve felt that it’s important for a physically fit and healthy documentary photographer/filmmaker to provide services to mankind,” he says. “The pandemic has brought a new perspective to my life and reminded me that no civilization can sustain itself without collective effort.”